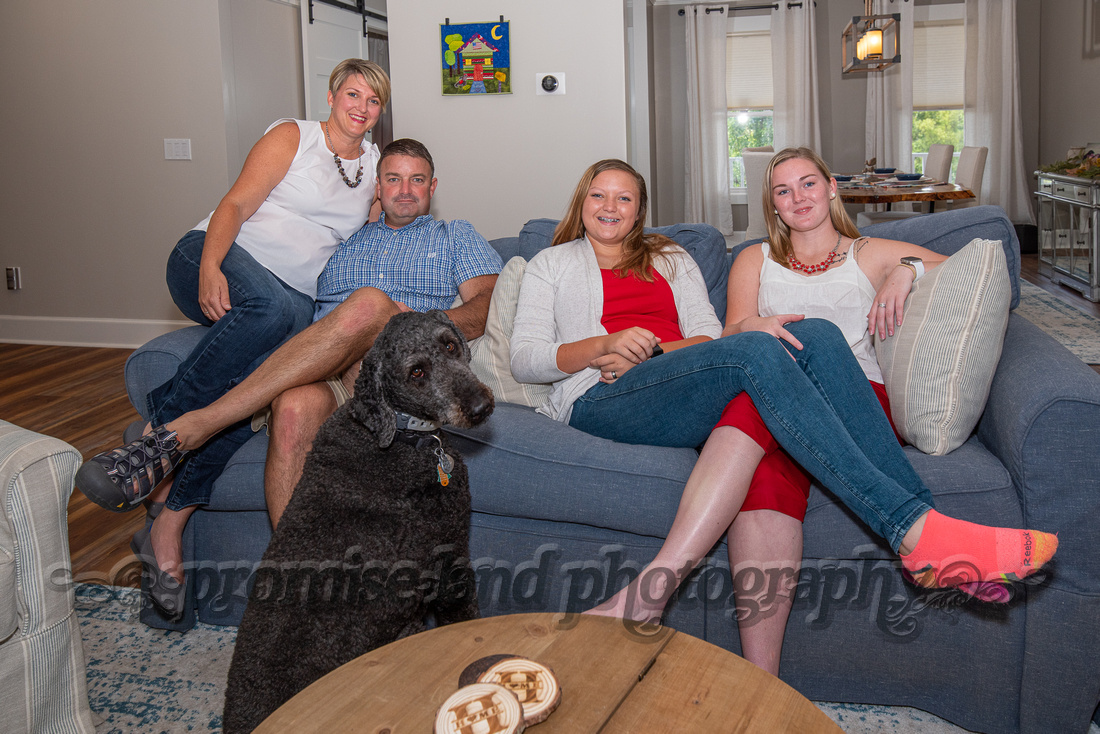 I had an opportunity arise to photograph a house for a California company: Carrington Charitable Foundation (CCF). They buy, build, or update homes for disabled veterans. CCF recently completed a renovation on a home in Jacksonville, NC, which is about an hour away from me. I agreed to do the shoot that far away because it was for a veteran's benefit. I struck out that day headed for a house at the end of a road in an area to which I had never been. What could have been a strange situation turned into a humbling blessing - I got to meet Ward and Amy Taft, their two beautiful daughters, their three adorable dogs and learn their incredible story!

Ward was an exceptionally skilled Navy medic who fought alongside the famed and highly-trained Marine Recon, a group of elite warriors executing special operations behind enemy lines. Unfortunately, Ward's brain had been damaged in the line of duty to his country. He had been involved in multiple explosions and has had multiple concussions. MRIs also showed significant damage to his frontal lobe. The Taft family began a long and difficult road coping with Ward's Post-Traumatic Stress Disorder and Traumatic Brain Injury.

But with faith in God to guide them, they are turning this terrible circumstance into opportunities for service. They are heavily involved with Operation Heal Our Patriots, which is an arm of Samaritan's Purse. As OHOP mentors, they serve their military community in Jacksonville. This year, Ward graduated from Western Carolina University with his Bachelors Degree in Disaster Management and has joined Samaritan's Purse newest initiative which is disaster relief teams that are specifically formed around the OHOP families.  He will lead one of the military specific teams for domestic disaster relief. Amy left her career as a teacher and began working for Institute for Veteran and Military Families as the Curriculum and Learning Manager. Last year she was honored to be chosen as a member of the inaugural class of the Bush Institute Stand to Veteran leadership program.  As part of this program they were challenged to take on a project that impacted the veteran leadership space.  After much thought, exploration and a lot of prayers, God led her to start an organization that is now called Third Star Foundation.  This organization's mission is to provide continuous support to the children of wounded and injured service members through peer to peer support groups.  They currently have 2 groups - one in Jacksonville, NC and one in Fayetteville, NC and serve 40 children.  Their hope is to expand the model to areas across the nation once they prove that this type of support works.

Because dealing with PTSD and TBI aren't enough, the Taft's were further tested by Hurricane Florence. They had begun some home renovations in anticipation of Ward's eventual health digression when the storm hit in early September, 2018. They had been advised to evacuate and go to Atlanta so Ward could be near his doctors and medical support team. When they returned to NC they found their property that surrounds their home had been completely flooded, although the waters stopped mere feet from their house itself. Unfortunately much of their furnishings were in storage pods that did get flooded. They found themselves frustrated by insufficient VA funds to help with the kinds of remodels that were going to best benefit Ward. Someone at Shepard Center in Atlanta contacted Carrington Charitable Foundation on behalf of the Taft family, and they were selected for not just the master bath remodel that they were trying to accomplish, but an entire home makeover, complete with exterior ramps and walkways! CCF contacted me to go take the photos of the beautiful new Taft home for their shareholder reports. I cannot tell you what an honor it was for me to get to meet the Tafts and now help share their story with you.

I encourage you to learn more about this family by reading the info at the links that I will provide below. And if you can, make a donation toward one of the efforts that they support.